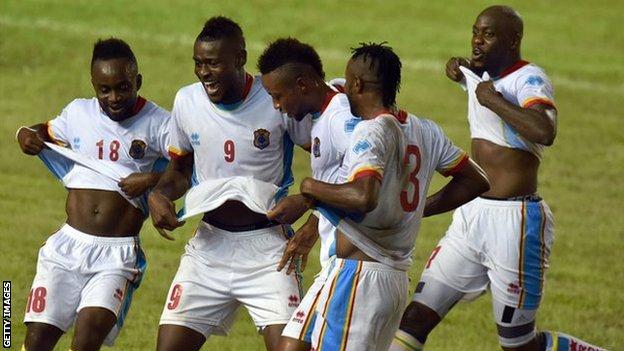 DR Congo striker Jeremy Bokila believes his team need more quality in midfield in order to make the most of the talent they have in attack.

Bokila's strike in a 1-1 draw with Tunisia took DR Congo into the quarter-finals, having scored one more goal than Cape Verde in the group phase.

With only two goals scored in total, DR Congo have scraped into the last eight.

"Maybe we need a number 10 who can make the connection between defenders and strikers," Bokila told BBC Sport.

The 26-year-old, who plays his club football in Russia, scored with his first touch after coming on as a substitute on Monday.

But Bokila feels the team can pose a greater a threat if they improve their focus in their quarter-final against Congo on Saturday.

"We'll see what will happen in that game because we are going to work hard for the match - we must win and it demands a lot of concentration," he said.

"I think we can go further if we stay concentrated - because you saw in the game [against Tunisia] sometimes we made bad choices so if we can improve on that in training we'll be better."

The quarter-final between DR Congo and Congo not only brings together two neighbours but also sees Red Devils' coach Claude LeRoy come up against a side that he has had two spells in charge of in recent years.