Chelsea and Liverpool served up a Capital One Cup classic at Stamford Bridge - with every ingredient in the mix to keep a packed house on the edge of their seats for 120 minutes.

The plot had an arch-villain in Chelsea's short-fused striker Diego Costa, two managers who were once master and apprentice in Jose Mourinho and Liverpool's Brendan Rodgers, helped along by a decade of antipathy and rivalry between the two clubs across the whole range of domestic and European competition.

If those who witnessed this enthralling spectacle wished to nitpick, it would be about the fact that Branislav Ivanovic's extra-time header was the only goal of the match. It put Chelsea through 2-1 on aggregate and they now meeting either Sheffield United or Tottenham at Wembley on 1 March.

It may not have been a game to satisfy the purists, there was too much ugliness for that, but no-one left Stamford Bridge short-changed or with a lack of talking points.

Diego Costa is the player and personality Chelsea's opponents love to hate but also a striker on the way to establishing himself in Stamford Bridge folklore.

From the first whistle, of this season as much as on Tuesday, the 26-year-old was up for the fight - literally.

Costa is an outstanding attacking force who lives on the precipice of the game's laws but also has no hesitation in crossing it should it suit his purpose. Chelsea faded from the title race last season because they lacked menace up front, both in goals and attitude. No such problems now.

He has crossed swords with Liverpool defender Martin Skrtel before this season and it was not long before they were at it again, going full tilt at each other when Costa was denied a clear penalty as he was brought down by his adversary in the area.

Costa was already guaranteed headlines for a nasty stamp on Liverpool's Emre Can, with Mourinho's defence of his actions rather limp, and he looked guilty of the same offence - although with perhaps a small window of an excuse this time - on Skrtel in the second half.

No-one was safe from his aggression and a tussle on the floor with Liverpool captain Steven Gerrard ended with the pair going head-to-head and picking up yellow cards. Costa refuses to take a backward step from a confrontation. Love him or hate him, it is never a quiet 90 minutes when he is around.

Chelsea were toothless last term but they have found their snarl this season in the shape of Costa - and then some. Goals too, as he is currently the Premier League's leading scorer with 17 goals.

Where he crosses the line, however, he must be punished and he will be very fortunate to escape the incident with Can if hard-pressed referee Michael Oliver says he did not see it.

Mourinho said the spat with Can was "absolutely accidental". It remains to be seen whether the Football Association shares his view.

Liverpool boss Rodgers, meanwhile, said: "It's disappointing to see such a good player like that." He may have shared the same thoughts about one of his old boys who shared those same streetfighting qualities…one Luis Suarez.

Costa was also taunted throughout by Liverpool fans who were furious at his antics but once again credibility is stretched when it is recalled how they revelled in the presence of Suarez. And defended his excesses.

As for Costa, he does not appear to care what anyone thinks in his pursuit of victory. The behaviour he displays may not be to everyone's taste but they will not hear a word said against him at Stamford Bridge.

Referee Michael Oliver was seen in deep discussion with Mourinho during the half-time interval on what was a hectic night for the official.

Oliver was confronted with major decisions from the first whistle - so how did he fare?

Diego Costa stamps on Emre Can

This incident happened right on the touchline as the ball was rolling out, just feet away from fourth official Phil Dowd and within touching distance of Mourinho and Rodgers.

Costa made no attempt to hurdle Can and clearly brought his foot down with force on his ankle. Cue the swift emptying of both benches and a chaotic crowd scene.

If Oliver has seen this, then there is no excuse for not showing Costa a straight red card. It should also be noted that neither manager reacted instantly despite that proximity.

Did Oliver see it? If he did, he has made an error. If he did not, then Costa may be hearing from the FA.

And one more question. What is the point of the fourth official if he is seemingly powerless to act when such an offence is committed almost right under his nose?

Verdict: understandable error (only if Oliver was unsighted)

Oliver seemed to have a clear view of this one. The ball was again on its way out when Skrtel suddenly commits to a needless tackle, makes contact and Costa goes down. No room for sympathy for the official here - a clear penalty and should have been given.

Some sympathy here for referee Oliver as he was dealing with a foul by Lucas on Oscar when Skrtel and Costa clashed again by the touchline in the next phase.

It would have been very difficult for Oliver to spot this and there was also a slight grey area in this one whereas Costa's first stamp on Can was an open and shut case. Skrtel's leg was raised and Costa was hurdling away. He had to land somewhere but did he make a deliberate stamp? Bit more doubt about this one. Both were lucky to escape yellow cards for their resultant fracas - especially as they were both cautioned later.

Lucas's persistent fouling - for which he paid the price when another on Eden Hazard led to Ivanovic's winner - put him in danger of a red card. In fact this was the matter Mourinho was discussing with fourth official Dowd when the goal went in behind his back.

The lucky one, though, was Jordan Henderson. He was already on a yellow card when he clearly moved his hand towards Hazard's pass for an obvious infringement. Oliver decided the free-kick was the only punishment and Henderson stayed on. Very fortunate to benefit for a real act of leniency.

Unlucky Liverpool - but Rodgers on the up

Liverpool and manager Brendan Rodgers deserve huge credit for the way they held their nerve amid early season crisis and the desperate disappointment of the Champions League exit. This was further evidence of their vast improvement.

Since the 3-1 loss at Crystal Palace on 23 November, Liverpool have played 17 games and lost just two - away to Manchester United and this Capital One Cup semi-final second leg at Chelsea.

Rodgers has reshaped his system with three at back in Can, Skrtel and Mamadou Sakho. The pressing game he preaches has returned and the switch of Raheem Sterling to a central attacking role has brought some rewards.

And again at Stamford Bridge, this looked a lot more like the vibrant Liverpool of last season. There is, however, just one missing ingredient.

Liverpool blew away opponents in a blizzard of goals from Luis Suarez and Daniel Sturridge last season. One has gone and the other is only just on the way back after being out with injury since August - and it shows. 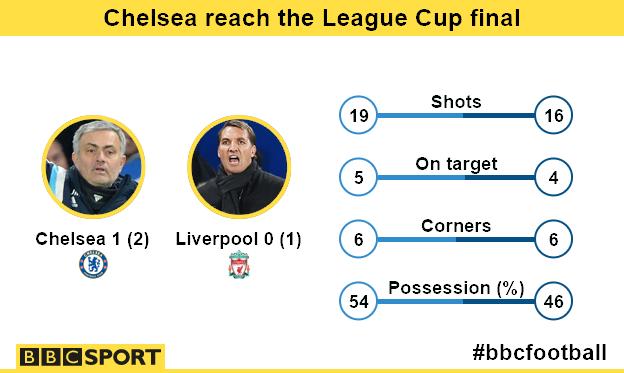 Liverpool had plenty of opportunities over the two legs but at no time were they ahead in 210 minutes. They did not take their chances when it mattered and the problem was in evidence again at Chelsea, particularly when Henderson somehow headed Sterling's cross wide.

And in Diego Costa, Chelsea had the goalscoring threat and general air of menace that Suarez used to give them - that in-your-face attitude that makes defenders aware of his presence for every second.

Recall how Rodgers moved to sign Costa from Atletico Madrid at the start of last season only for the striker to sign a new deal in Spain before moving to Chelsea. Costa and Suarez in the same attack - just let that sink in.

Liverpool could do with a Costa now but that ship has sailed. Instead, responsibility will fall on Sturridge and rarely has any player at Anfield been elevated to such status and importance by being out through injury.

Another telling statistic is that in that 17-game run Liverpool have had seven draws. Too many.

Rodgers has done superbly and shown real managerial acumen and maturity to revive Liverpool season - but this defeat over two legs shows the next step is to somehow restore that ruthless goalscoring edge.