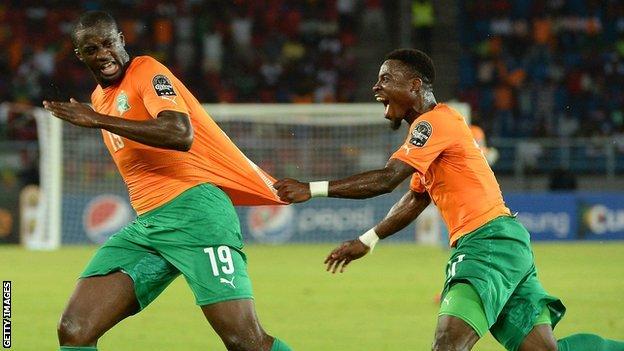 Ivory Coast reached their third Africa Cup of Nations final in nine years after proving too strong for DR Congo.

Yaya Toure put them ahead with a ferocious 20-yard shot but soon after Dieumerci Mbokani levelled with a penalty after Eric Bailly handled.

Gervinho had a header cleared off the line before he made it 2-1 when he curled in to finish off a breakaway.

The Ivorians made sure of victory when Wilfried Kanon kneed home after Serge Aurier's header had been saved.

Gervinho, outstanding throughout, had a good chance to add further gloss to the scoreline late on, but his effort was saved by the busy Robert Kidiaba.

In their quarter-final with Congo, the Leopards had clawed their way back from 2-0 down to win 4-2. But on Wednesday, they were soundly beaten by an Ivory Coast side who utilised the pace of Gervinho to superb effect and looked determined to make up for recent failures in the competition.

Beaten finalists in 2006 and in 2012, Ivory Coast's so-called 'golden generation' have been unable to add to their country's sole Cup of Nations trophy in 1992.

But despite the retirement of talisman and striker Didier Drogba, this side has started to give credence to coach Herve Renard's claim it contains the "perfect" blend of experience and youth.

After surviving an early scare when Jeremy Bokila tested the keeper with a fierce shot, The Elephants assumed control of the match. And Manchester City midfielder Yaya Toure demonstrated their intent with a thunderous effort from the edge of the box to put them 1-0 up.

They were briefly pegged back when Bailly mistimed his jump to head the ball and handled instead, conceding a penalty which Mbokani confidently scored from a three-step run-up.

But Gervinho was to prove too hot for DR Congo to handle - he was denied by Gabriel Zakuani's superb headed clearance off the line via the bar, but a minute later finished emphatically after being set up by Wilfried Bony at the end of a three-on-two counter-attack.

After the break Yannick Bolasie came close for DR Congo after a superb run and shot, but there was not enough of that cutting edge from the Crystal Palace man and his team-mates.

And each time Ivory Coast came forward, they looked capable of scoring.

When more great work from Gervinho won his side a corner, the set-piece was met by a powerful header from Aurier, which keeper Kidiaba could only parry to Kanon, who converted.

Ex-Arsenal winger Gervinho almost grabbed his second of the game with two minutes left, but Kidiaba rushed out to block the Ivorian's dinked shot.

Next up for Ivory Coast will be either hosts Equatorial Guinea or Ghana, who meet in Thursday's semi-final.