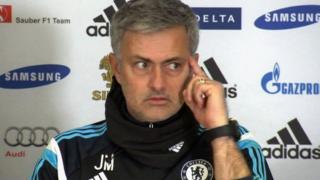 TV pundit must be nuts - Mourinho

Chelsea manager Jose Mourinho says that an unnamed TV pundit is part of a "campaign" against his striker Diego Costa, adding that he "must be nuts".

Mourinho was talking after striker Costa appeared to tread on Emre Can and Martin Skrtel during Chelsea's Capital One Cup semi-final win over Liverpool on Tuesday.

Liverpool boss Brendan Rodgers described Costa's actions as "poor", adding "there was no need to do it".