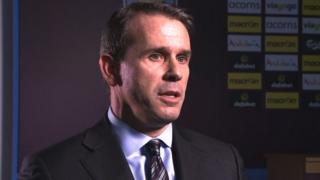 Aston Villa chief executive Tom Fox says he "struggles" with the "false narrative" that manager Paul Lambert is solely to blame for the club's poor form.

He tells BBC Sport that Lambert has never been close to the sack, despite taking only 12 points from their last 18 Premier League games.

Fox joined Villa in August after five years as commercial manager of Arsenal.