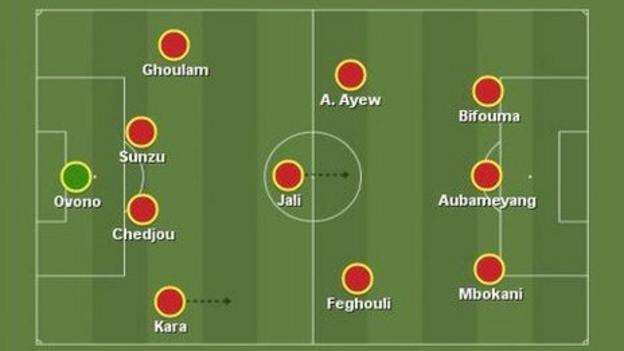 Stunning goals, shock exits and the drawing of lots to decide qualification, the 2015 Africa Cup of Nations has already provided drama and controversy - and we have not yet reached the quarter-final stage.

The tournament has seen 45 goals scored in 24 group matches with eight teams bidding to win the title in Equatorial Guinea.

Alongside statisticians Opta, BBC Sport presents the statistical team of the group stages, with each player in the tournament rated on numerous actions in the positions in which they play.

With the January transfer window set to close soon around Europe, are there some hidden gems set to achieve a big move on their back of their Afcon heroics?

Ovono has made 13 saves, more than any other goalkeeper.

Kara may have been ultimately disappointed at being knocked out at the group stage with Senegal, despite having made 36 clearances, more than any other defender in the group stages.

The defender played a key role in helping Algeria qualify for a quarter-final against Ivory Coast, blocking five crosses, more than any other player.

The defender had 163 touches in his own half, the most of any defender, but was left disappointed as Cameroon finished bottom of Group D.

Zambia may have been knocked out at the group stages but the defender made a stage-high 11 interceptions.

Ghana will hope to go a lot further in the tournament and Ayew could play a key role, having scored two goals from two shots on target.

Algeria were joint favourites going into the tournament and Feghouli played a part in helping them into the quarter-finals, being the only player to provide an assist for more than one goal in the group stage.

A disappointing tournament for South Africa but Jali created six goalscoring chances for Bafana Bafana. He deserved better than being knocked out at the group stage.

The striker had six shots on target in the group stage, more than any other player, but was left disappointed as Gabon lost out in the first round.

The striker will be a threat in Saturday's quarter-final against Congo, having had more shots from inside the penalty area in the group stage - eight - than any other player.

Having created eight goalscoring chances, the joint highest in the group stage, he will hope to do more of the same against DR Congo in Saturday's quarter-final.