Chelsea signed Juan Cuadrado for £23.3m, Manchester United loaned an unheralded left-back from Bolton and a host of deals collapsed late on.

But what did we learn from the window? BBC Sport takes a look.

Big clubs use January as a safety net

BBC Sport chief football writer Phil McNulty: "The bigger clubs are notoriously wary of buying in January unless they have a cast-iron guarantee of quality. The better players rarely become available and those of that quality have either played, or are playing, in the Champions League.

"It is a small market and consequently class is harder to find. Manchester City found it in a striker with proven Premier League quality in Wilfried Bony while Chelsea bought a player with World Cup pedigree in Juan Cuadrado.

"The clubs at the sharp end of the Premier League have a clear summer strategy and hope to get the major deals done then. They use January almost like a safety net should they need to top up their squad for any reason - although if that rare chance to sign a player of the highest quality becomes available they are at the ready."

The strugglers: Unhappy, optimistic or somewhere in between

McNulty: "The face of QPR manager Harry Redknapp told the tale as he looked back on a transfer deadline day in which he struggled to add new faces to a side lying 19th in the Premier League.

"Hull City manager Steve Bruce was also bitterly disappointed as a deal to sign Spurs winger Aaron Lennon fell through. Despite that, Bruce will have high hopes for striker Dame N'Doye, who completed his move just after midnight.

"West Brom manager Tony Pulis will be happy to have added Callum McManaman to provide pace and width and also Manchester United's Darren Fletcher for experience, although he would have liked to add even more numbers to his squad.

"Crystal Palace have pulled off the coup of signing Wilfried Zaha on a permanent deal so they will feel more confident of survival.

"So as the window closes, QPR will be unhappy, West Brom and Palace will be more optimistic and Hull will be somewhere in between." 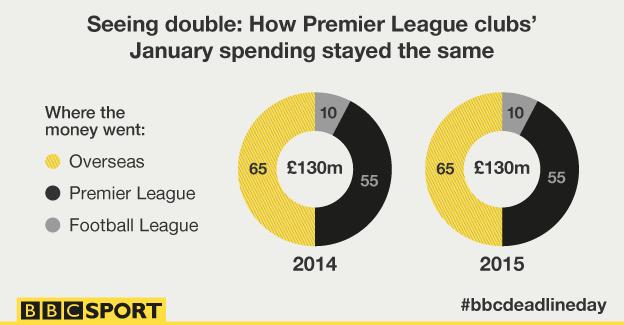 There were 35 Premier League signings in the January window, compared to 46 last season, but why is that?

"More than any other transfer window to date, the impact of financial fair play seems to be taking hold, especially for the big clubs," said football finance expert Robert Wilson of Sheffield Hallam University.

"Chelsea demonstrate the real impact of the new regulations with a great deal of focus now being placed on their net transfer spend position. No longer are we seeing clubs 'splash the cash', instead they look to sell before they buy, hence selling Schurrle to facilitate the signing of Cuadrado.

"Manchester City have followed suit - they seem more cautious and no longer seem to throw the kitchen sink at player acquisitions. After being hit with a hefty fine they are looking to balance the books first and foremost.

"The anomaly is surely Manchester United. Many expected them to spend again. They can certainly afford to with the revenue they generate. I think that their lack of spend is much less to do with being worried about financial fair play and much more to do with a long term strategy to 'buy better'.

£95m short of the January record 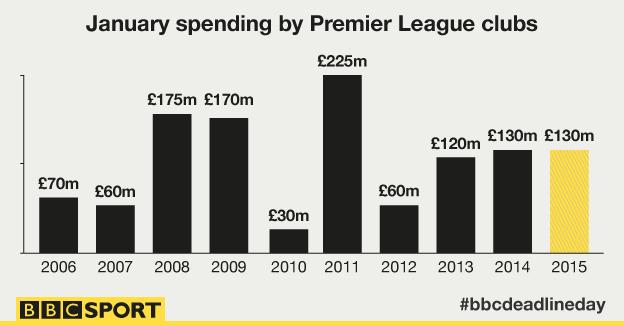 BBC World Service's John Bennett: "Just like in England, this window has felt quiet this year on the continent. Between them, the champions in Italy, France, Germany and Spain only made three signings, all of them on loan. In France spending was down 53% compared to last year.

"Inter Milan and Wolfsburg will be delighted with their work in January. Inter boss Roberto Mancini complained that he'd inherited the wrong type of players when he took over as head coach but Xherdan Shaqiri and Lukas Podolski have added quality and balance to the squad.

"Meanwhile, Wolfsburg beat Bayern Munich 4-1 on Friday and Andre Schurrle's arrival is the perfect way to build on that result.

"David Moyes will be one of European football's frustrated managers. Real Sociedad failed to sign anyone, missing out on possible targets such as Etienne Capoue, Nabil Bahoui and Joel Campbell."

The Premier League continues to dominate 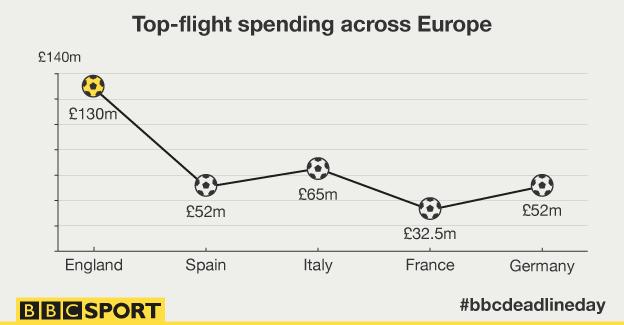 What happened to all the strikers?

Strikers - the players to save you from relegation or to kick-start a flagging bid for European qualification. Everyone wants to sign one, right?

On the evidence of this window, that is either not true or goalscorers are not readily available. Only eight of the 35 players signed by Premier League clubs in January were strikers and three of them were signed by Crystal Palace.

However, while more players from other positions were signed, clubs were less inclined to take a risk with their attacking recruits, opting for experience rather than youth, with the average age of strikers signed significantly higher than that of defenders or midfielders.

Sunderland and Crystal Palace brought in seasoned Premier League campaigners in 33-year-olds Jermain Defoe and Shola Ameobi respectively, while Manchester City made arguably the biggest move of the window by signing Wilfried Bony, 26, from Swansea.

Look down the list of confirmed transfers and one word pops up more than others: Undisclosed.

Officially, not a single club has chosen to reveal exactly how much money has changed hands for the purchase, or sale, of a player in the top flight.

It is a trend that has gathered pace in recent years. In January 2013, two of the 26 deals where a transfer fee was paid were disclosed while last year there was just one - Juan Mata's £37.1m move from Chelsea to Manchester United. The other 47 transfers involving a fee were undisclosed.

Drop into the Football League this season and not a single fee was revealed. Secrecy, it seems, is everything.