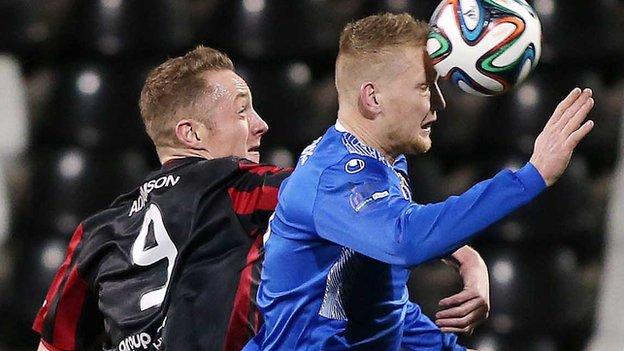 Crusaders boss Stephen Baxter believes an improving Dungannon Swifts side will provide a tough test for the league leaders at Stangmore Park on Saturday.

The Crues sit six points clear at the top of the Premiership while Dungannonn have moved up to ninth after winning their last two games.

"The Swifts always gives us a hard game and they are particularly good at home," said Baxter.

"They are a big, strong side and with their good form they are on a roll."

Baxter has seen his team lead the standings in previous seasons before falling away, but the Crues have shown no signs of faltering this time by winning their last seven league matches.

"This season we have one or two players at the top of their game and we are full of confidence," he added.

Michael Hammond and Scott Young will take you through the action at Dungannon v Crusaders while there's commentary from Eric White and Philip Mitchell at Cliftonville v Glentoran.

There will be updates from the other four Premiership games and the Championship encounter between Larne and Ards.

"There is no magic ingredient, it's a simple game - we have momentum and it's all about continuing that and building upon it."

Dungannon have received a boost ahead of the game with Jamie Douglas, Ryan Harpur, Grant Hutchinson and Andrew Mitchell signing two-year contract extensions.

Swifts defender Dougie Wilson has signed a deal to stay with the club until the end of the season with the option of a further year to be added.

It's up to the chasing pack to close the gap on the Crues and nearest challengers Linfield face a Windsor Park meeting with Ballymena United, who were beaten by Cliftonville in last weekend's League Cup final.

The Reds return to league action against Glentoran, who will have midfielder Jordan Stewart available after spending the week on trial at Middlesborough.

Portadown will aim to bounce back from their Seaview thrashing when they take on Ballinamallard at Ferney Park.

Glenavon host Warrenpoint Town while bottom club Institute are up against Coleraine at Drumahoe.

"There's apathy there, there's fear and there is hesitancy - that's not what you need when you are playing in the top flight," said Kee.

"They are going to have to learn, and learn fast, otherwise it's going to be a difficult run-in for us."