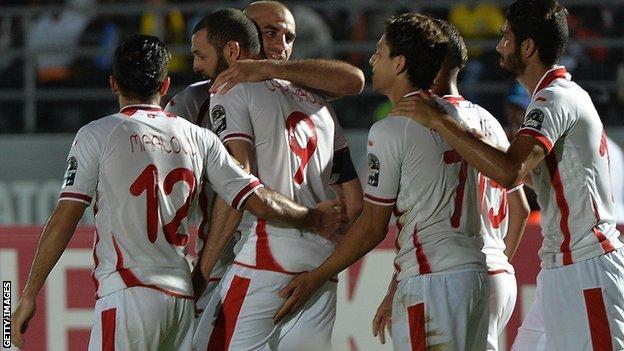 The match was switched to the 35,000-capacity Bata Stadium from the 5,000-capacity Ebebeyin Stadium, and it will be packed with passionate locals.

"With the public behind them, they are in heaven," Leekens said.

"Nothing can hold them - except that Tunisia also want to qualify, and we can do that with our football."

And while he described the match as "a hell of a challenge", Leekens is confident he side will be up to it.

"We have done the same preparation - we've analysed [Equatorial Guinea] in every detail, like we did the big teams," he added.

Tunisia reached the last eight by topping Group B with a win over Zambia and draws against Cape Verde and DR Congo.

Leekens admitted that there had been difficulties in competing in Equatorial Guinea but said his side had not allowed any problems, on or off the field, to distract them.

"It has been tough the last two weeks - but if I show my disappointment to the players, then I am not a good coach," Leekens said.

"We have something - we are now winners [and] even if we're behind, we will believe in our game."

Tunisia's quarter-final with Equatorial Guinea will be preceded in the Bata stadium by the quarter-final between Congo and their neighbours DR Congo.