Cheltenham fans have raised £650 to fund a billboard proclaiming their team is better than Manchester United.

Robins supporters claim this because their side won 2-1 at Cambridge United in October's League Two game, but the Premier League giants drew 0-0 against the U's in the FA Cup last week.

Murry Toms, a lifelong fan, started the campaign on Thursday in a bid to boost ailing attendances at Whaddon Road.

He reached the target in 11 hours and is now looking to fund a second poster.

The Robins are 17th in the fourth tier of English football, three points off the relegation zone, and sit 81 places below United in the football pyramid.

Their average league attendance last season was 2,980 - the 10th lowest in the Football League - compared to 73,991 the Red Devils saw attend Old Trafford.

"It's going to go in the centre of the town so people can see it and we get more people going at Whaddon Road," Toms told BBC Radio Gloucestershire.

"It's great to put a couple of posters up but it's even better to see hundreds of Cheltenham fans getting excited about the club.

"Maybe people don't go [to games] because it's too expensive or think the quality of football isn't great. But I don't think that's important. I still think people should get up to Cheltenham and get behind the team."

Louis Van Gaal's side will host Cambridge in their FA Cup fourth round replay on Tuesday, 3 February, with the winner facing Preston or Sheffield United in the next round.

The battle of the billboards 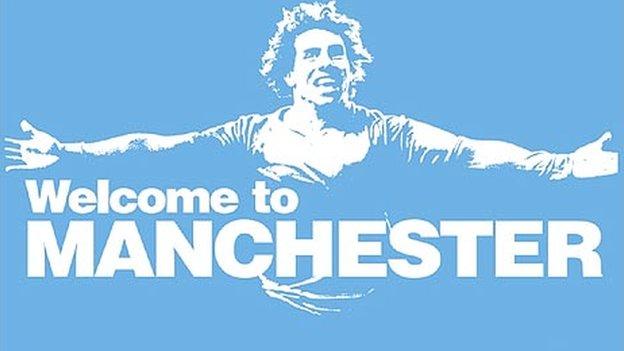