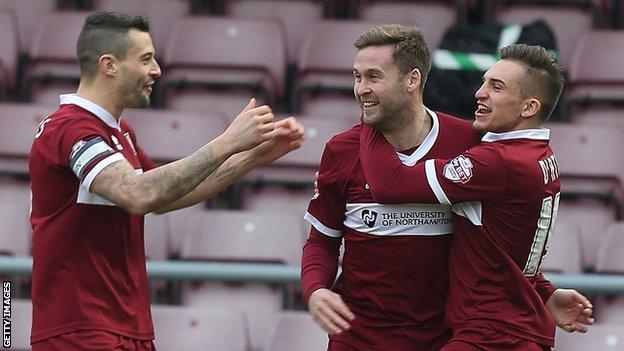 The hosts scored after just 26 seconds when Joel Byrom pounced from six yards, after Brendon Maloney's low cross was parried by Andreas Arestidou.

Morecambe equalised when Jack Redshaw's effort was saved by Matt Duke, allowing Jamie Devitt to head in off the post.

Morecambe keeper Arestidou dived low to his right to save Richards' 70th-minute penalty.

Having moved up to 11th, within five points of the League Two play-offs, Northampton's next two matches are at two struggling sides, 20th-placed Mansfield Town and bottom club Hartlepool.

"I don't believe it should have been a struggle for us, but it was, so credit to the opposition for going for it. The supporters were fantastic as always.

"Zander Diamond has a problem with his hamstring. It's really disappointing. However, Ben Tozer came on and did a great job.

"We've got another big week coming up and hopefully we can keep it going. Hartlepool and Mansfield are fighting for their lives."