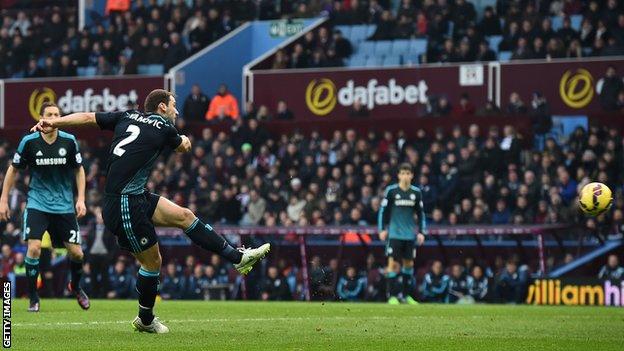 Chelsea extended their lead at the top of the table to seven points after seeing off an Aston Villa team who finally ended their Premier League goal drought after 11 hours.

With nearest rivals Manchester City held at home by Hull, Branislav Ivanovic's winner secured a vital victory for the leaders.

Villa, who had not scored in the league since 20 December, responded well after falling behind to Eden Hazard's early goal and levelled through Jores Okore's header at the start of the second half.

But Ivanovic restored the Blues' advantage after 66 minutes and they went on to secure Jose Mourinho's first win at Villa Park at the sixth attempt.

The spirit Villa showed in defeat will be scant consolation for Paul Lambert's struggling side, whose winless run now stands at nine league games, but it appeared they were heading for a far worse defeat when Hazard opened the scoring after eight minutes.

That goal was scored far too easily from Villa's point of view, with their defence being carved apart as Oscar escaped down the right and fed Willian, who found Hazard running into the area to slot home.

Villa's main tactic in Lambert's 100th league game in charge seemed to be to fire a succession of crosses into the box, despite that fact their out-of-form target man Christian Benteke was dropped to the bench and Gabriel Agbonlahor did not offer much of an aerial threat in his place.

Blues keeper Thibaut Courtois gave them hope when he flapped at a couple of deliveries but Chelsea remained comfortable and even created further chances to extend their lead.

That all changed after half-time, when Villa finally found a way to hurt Mourinho's men.

Carles Gil had already shown some neat touches before slipping past Oscar on the by-line and lifting in a perfect pass for Okore to power home a downward header.

The goal brought wild celebrations from Villa's players and fans - with Okore booked for running into a crowd, who had not seen a league goal from their side since 20 December.

Ironic chants of "we score when we want" followed from the home supporters and with Chelsea pegged back in their own half, for a few minutes it least, it appeared more might follow.

Not for the first time this season, the Blues found themselves in a battle, but they responded in perfect fashion.

Mourinho's men held firm at the back and began to build their own spell of pressure. Willian sent two shots skidding narrowly wide but the waves of Chelsea attacks were becoming relentless.

Villa cracked after 66 minutes, when they failed to deal with Cesar Azpilicueta's run and cross into the area.

The ball broke for Ivanovic on the edge of the box, who fizzed an unstoppable first-time shot into the top corner.