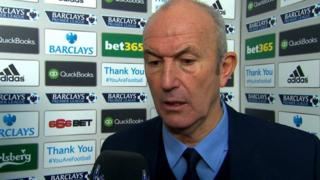 Albion were flat and flaky - Pulis

Tony Pulis says his West Brom side were "flat and flaky" at the start of their 3-0 home defeat to Tottenham.

Craig Dawson's header against the crossbar before the break was as close as the hosts came to scoring, and Pulis says he is "working really hard" so bring in new signings before the end of the transfer window.

Spurs have not lost in five trips to The Hawthorns since December 2008, when Roman Bednar and Craig Beattie scored for the Baggies.