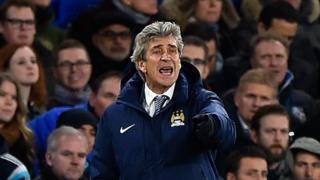 Pellegrini 'not happy' with draw

Manuel Pellegrini is "not happy with a point" and says Manchester City were the "better team" in their 1-1 with Chelsea at Stamford Bridge.

Chelsea's Loic Remy opened the scoring on 41 minutes, but David Silva levelled just before half-time, before the two title contenders held out for a draw that leaves the hosts five points clear at the top of the Premier League.

City are without a win in their last four games.