Former Arsenal defender and MOTD2 pundit Martin Keown expands on his TV analysis of the Gunners' 5-0 win over Aston Villa and explains how manager Arsene Wenger adjusted his existing system in January, instead of bringing in new faces, to make his side more solid at the back.`

There were a lot of calls for Arsenal to sign a new defensive midfielder before this transfer window opened but, in the last few weeks, the Gunners have found a new way to win without needing new players to do it.

Arsene Wenger's side were seen as having a soft centre when they lost to Southampton on New Year's Day, and the lack of protection given to their defence has been frequently criticised this season. 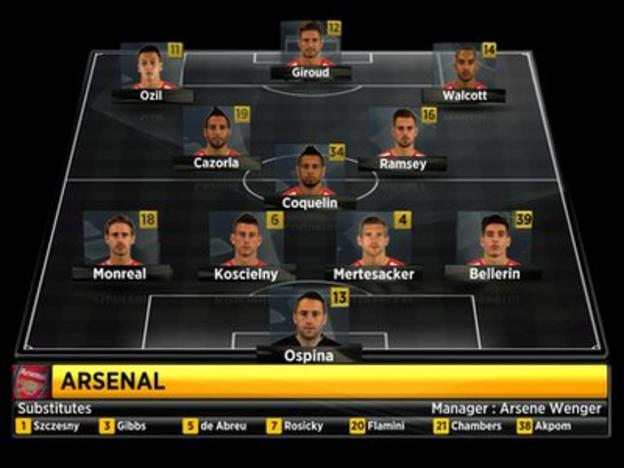 But, since that defeat by Saints, Wenger has improved them massively at the back.

He has done it by adjusting his midfield system to make it work with the players he has already got, rather than signing any more.

Wenger might still feel that he needs to buy a new defensive midfielder before the window shuts on Monday.

But, rather than filling a problem position, it would be as cover if Francis Coquelin gets injured, so he has someone else who can do his job.

Coquelin makes his mark, at last

Coquelin's impact since he came into the first team in December has been a huge bonus for Arsenal.

He has been at the club since 2008 but, before this season, he had made only nine Premier League starts in six years and spent the whole of the previous campaign on loan at German club Freiburg.

His recent progress shows you why some players are worth waiting for, because I think by the age of 23, a lot of managers would probably have given up on him before now.

Wenger, however, kept seeing something there.

When I spoke to him recently, Wenger explained to me that, earlier in the season, every time he saw Coquelin train he told him that he should be in the first team but felt he had to go out on loan first because he needed the experience.

Coquelin ended up being sent to Championship side Charlton in November to get some games under his belt.

Since returning, Wenger has pretty much put him straight in his team. Coquelin has taken his chance superbly, and he fully understands his job for the team.

Arsenal now have an anchor in midfield

At the start of the season, Wenger was playing with one deep-lying midfielder, usually Mathieu Flamini, with two men either side of him.

But Flamini was dropping so deep in front of the defence that he ended up out of the midfield itself.

People might think that Coquelin has just replaced Flamini as the deep-lying player but in fact he has been playing higher up the pitch. 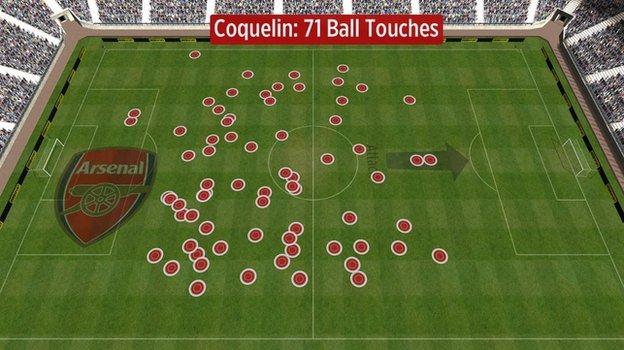 Another thing that has changed is that Coquelin is not being asked to do the defensive job on his own either.

But he is the team's anchor in that he does the crucial job of dragging the other Arsenal midfielders back to wherever he goes.

He always takes up a good position, and that means Aaron Ramsey or Santi Cazorla know where they have to return to as well.

Ramsey key to balance in defence and attack

Cazorla has the ability to stitch himself into the play going forward when Arsenal attack and he is working hard defensively too, as we saw in Arsenal's impressive win over Manchester City.

But Ramsey is the player who Wenger primarily wants to see coming back to form a two-man shield in front of their defence.

Against City and Villa, the Wales international was far more team-aware of where he needed to be to fill any holes. 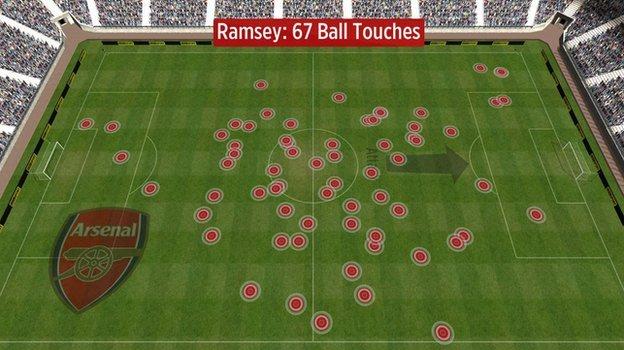 For me, that is a big reason why Arsenal are conceding possession at the moment - they had less of the ball than Villa did on Sunday, despite winning 5-0, and against City their possession rate of 35% was their lowest since Opta's records began in 2003.

Arsenal are quite happy for the other team to have the ball because, with Ramsey and Coquelin both back, they know the opposition cannot hurt them.

Ramsey can still gamble and go forward when Arsenal have good possession, but he is picking his moments far more carefully than before, and he does not join attacks as much as he did.

It was great to see that he had the same discipline against Villa as he did against City and, in both games, knowing when to go and when to sit gave Arsenal the right balance in defence and attack.

When they lost to Swansea in November, my MOTD2 analysis was all about how the Gunners got that balance wrong and sent too many players charging forward.

That is not the case now, and they are not conceding goals either. Nobody is talking about them having a soft centre any more.