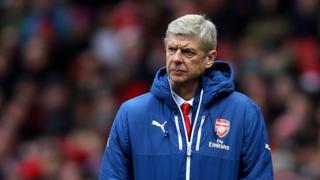 Arsenal boss Arsene Wenger says he was pleased with the way his players took their goals during their 5-0 win over Aston Villa at the Emirates stadium.

Olivier Giroud, Mesut Ozil, Theo Walcott, Santi Cazorla and Hector Bellerin all got on the scoresheet as the Gunners moved above Tottenham to fifth in the Premier League.

Arsenal scored five goals for the first time this season.