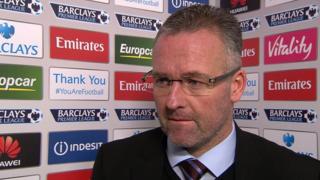 Aston Villa boss Paul Lambert says he is disappointed with his team's "capitulation" after they lost 5-0 away at Arsenal.

Olivier Giroud opened the scoring in the 8th minute and then turned provider for Mesut Ozil after the break. Arsenal striker Theo Walcott made it three before a penalty from Santi Cazorla and a debut goal from defender Hector Bellerin, 19, sealed a dismal day for Villa.