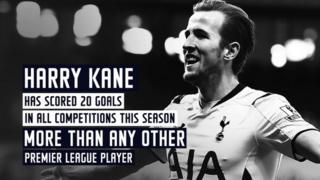 BBC Sport picks out the key stats and facts from the Premier League weekend.

Striker Harry Kane's ability to find the net in prolific fashion and Aston Villa's abject attack are highlighted, along with West Ham's terrible record at Anfield, and veteran goalkeeper Mark Schwarzer's hapless form when he makes his debut for a new club.

Burnley's weakness in defending headers comes under the spotlight and league leaders Chelsea's sudden shyness in front of goal at Stamford Bridge.