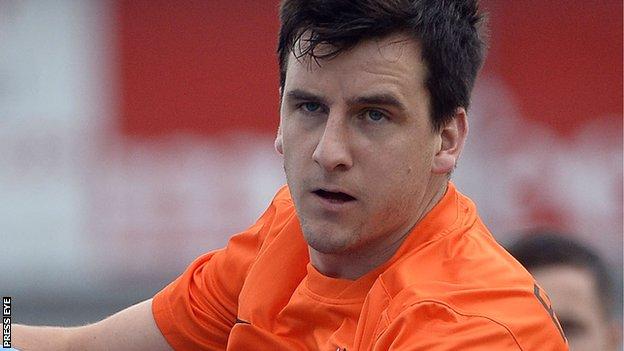 The sixth round Irish Cup tie between Warrenpoint Town and Linfield has been postponed while the Irish FA continue to investigate the recent signing of Darren Forsyth by the County Down club.

The probe will focus on whether the transfer from Glenavon broke Fifa rules because Warrenpoint would have been Forsyth's third club this season.

The last 16 fixture has been postponed until Monday 16 January.

Coleraine will be reinstated if Town are expelled from the competition.

A statement released by the IFA on Monday night outlined that "it is alleged that the player may have played in official matches for three different clubs this season in contravention of both Fifa and IFA player registration registration and regulations".

"Warrenpoint Town attended an emergency meeting to assist the committee with their enquiries, but more time is needed to conclude the investigation which is ongoing."

The Milltown club could also be deducted five points accumulated in Premiership games against Ballinamallard United, Cliftonville and Glenavon, and fined ÂŁ600.

The Northern Ireland Football League has written to Warrenpoint asking for the club's observations on the Forsyth saga.

He was also involved as a substitute in Warrenpoint's 3-1 win away to Coleraine in the fifth round of the Irish Cup.

Under the Fifa regulations, a player can appear for only two teams in one season.

Greystones AFC are an amateur club, based just south of Dublin, who play in the Leinster Senior Football League.