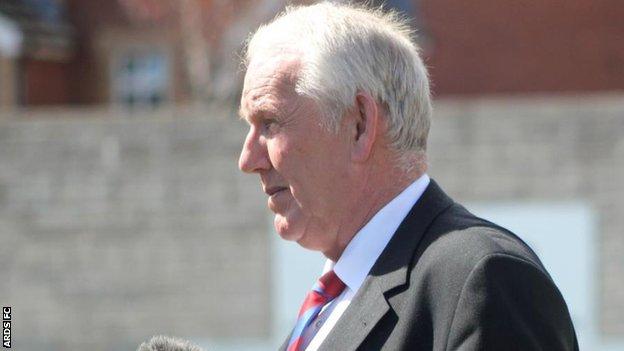 Championship One side Ards have told fans that the club's future is safe despite seeing a deal on a possible new ground fall through.

The club have been without a ground of their own since selling Castlereagh Park in 1999 in order to ease debts.

But they thought they had secured council-owned land on the Portaferry Road in their home town of Newtownards.

However, the council has withdrawn from the proposed deal, and Ards will continue to play home games in Bangor.

The site of the proposed new ground was an area known as the Floodgates.

Immediately after the council's decision became public, Ards released a media statement claiming the collapse of the deal had put the club's future in jeopardy.

However, chairman Brian Adams has admitted that had been an exaggeration.

"Our immediate reaction was 'we've had it', but we have great supporters and 115 years of tradition behind us," he said.

"We have just signed a three-year extension to use Bangor's ground. That is guaranteed, and during that time we will continue our search for a new home ground.

"We had been in negotiations with the council for about 18 months for 15 acres from Ards Borough Council.

"We were at the later stages and thought everything was about to be signed.

"There have been a number of false dawns over the last 12 years and now the plug has been pulled again."