The 67-year-old informed chairman Tony Fernandes at 05:30 GMT on Tuesday of his decision to leave the club, who are second bottom of the Premier League.

"I need immediate surgery," said Redknapp. "If I can't give 100%, it's better for someone else to take over."

Redknapp led QPR to promotion to the Premier League last season via the Championship play-offs.

There were reports he was one game from the sack before the 2-0 defeat by Manchester United on 17 January.

Afterwards, Redknapp blamed an "insider" for attempting to destabilise the club, while QPR chairman Tony Fernandes issued a statement on 19 January saying he would remain as manager.

"I have had such a fantastic time at QPR," said Redknapp, who took over Rangers in November 2012.

"I would like to thank the board, the players and all my staff, and especially the supporters who have been absolutely fantastic to me.

"My relationship with chairman Tony Fernandes has been one of the highlights of my footballing career and I wish the club every success.

"I am confident they will survive in the Premier League this year."

Fernandes thanked Redknapp for "everything he has done for QPR", adding: "We part on good terms and I would personally like to wish him all the best for the future."

Redknapp echoed those sentiments in an interview with the Daily Mail and insisted he had not fallen out with Fernandes because of the club's lack of business on transfer deadline day.

"I haven't got the hump, we haven't had a row," said Redknapp. "I knew some while ago that we were not going to be able to get much done in January.

"We had one real target on the last day, Emmanuel Adebayor, because we are short upfront, but he was too much money. I accept that.

"There are no hard feelings on my part. I've not had a problem with Tony Fernandes in all my time there."

Redknapp said the timing of his decision may look suspicious but added: "I know what people think - that I've been sacked, or stormed off because we couldn't get the players in - but I can't control what people think." 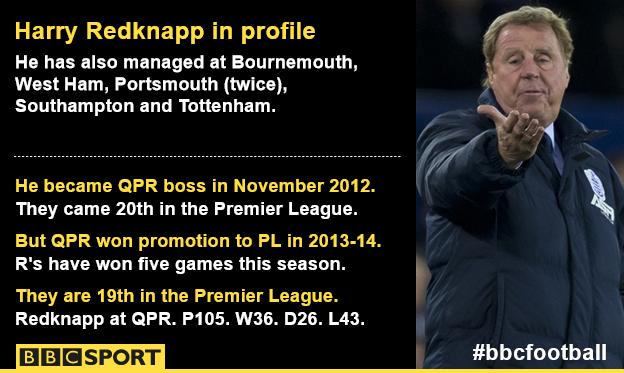 Former QPR player and manager Ray Wilkins said he had no idea of his friend's impending resignation.

"I don't think anyone knew," Wilkins told BBC Radio 5 live, suggesting Redknapp's wife, Sandra, may have been in the dark, too.

Redknapp failed to stop QPR from being relegated to the Championship in 2013 but guided them to promotion the following season.

However, they are struggling again. They have lost all 11 away games in the top flight, the firs club to suffer such a fate since Liverpool in 1953/54.

Their next three fixtures, all in the Premier League, see them host Southampton on Saturday then travel to Sunderland and Hull.

However, Wilkins noted there were potential candidates among the Loftus Road club's backroom staff, including Glenn Hoddle.

"They have an abundance of quality there in Glenn, Kevin Bond, Joe Jordan, Les Ferdinand," said Wilkins.

"They have got so many guys to choose from and there will obviously be people already putting in their CVs to Tony Fernandes."

"Harry Redknapp looked a beaten man as he explained QPR's failure to secure a selection of transfer deadline day targets such as Emmanuel Adebayor, Aaron Lennon and Matt Jarvis.

"All this came just hours after what now seems like increasingly significant tweets from QPR chairman Tony Fernandes, one starting with 'no more cheque book' and another declaring 'given the right motivation, tactics and coaching we can achieve much more'.

"It hinted at Fernandes' worries and, with Redknapp also requiring major knee surgery, the perfect storm came together to end his latest managerial adventure.

"The 67-year-old got QPR back into the Premier League but 11 straight away defeats hinted at the struggles he was having and no new faces only increased concerns.

"Fernandes gave Redknapp a strident vote of confidence a fortnight ago - but now Redknapp has made that decision for him."