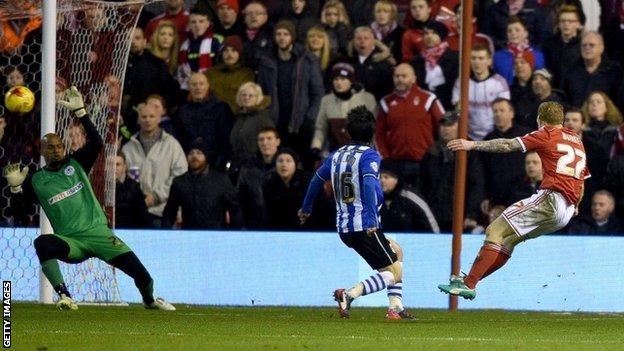 The home side doubled their lead after the break when Michail Antonio found Burke, who blasted home via the post.

Henri Lansbury sealed the win when he curled in from the edge of the box but Freedman's day was not perfect as Forest lost Assombalonga to injury.

Freedman has won his two opening games, after a run of six defeats in seven had cost predecessor Stuart Pearce his job.

The result, Forest's first home win since 8 November, takes them up two places into 10th, having slipped from the top of the Championship table in September to 12th spot.

But Wigan are in real danger of relegation to League One, eight points off safety with 16 games left, less than two years after they beat Manchester City at Wembley to win the FA Cup.

Wigan boss Malky Mackay has failed to turn things around since taking over as manager in November. They have only won once in his 14 games, against Leeds on Boxing Day.

The Latics' first chance came through Kim Bo-kyung, who joined the club last week despite being allegedly the subject of an offensive text message sent by Mackay at their previous club, Cardiff.

"We don't know exactly how bad Britt Assombalonga's injury is yet, but he will go for an MRI scan in the morning.

"Then the doctor will give me his opinion on what's happening. He will get a second reading and will let me know by Friday.

"He slipped as he went to shoot and his knee gave way on the grass. We're looking at least a few weeks, but we don't really know.

"I felt it dampened the crowd a little bit and both sides went very null and just wanted to finish the game. I was, though, so pleased for the fans that saw a convincing win, three different goalscorers, a clean sheet and a committed performance."

"I was disappointed with the result and performance. We lost a poor goal and then we had too many players below par. Players have to take responsibility and there wasn't enough of that, and not enough quality.

"We had two or three who passed muster, but the rest were not up to it.

"We have to make sure we give our fans who travel to Reading for our next game a better display than that."