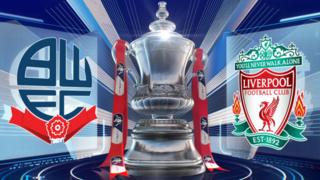 The Trotters took the lead through an Eidur Gudjohnsen penalty after Zach Clough was brought down in the box by Liverpool's Martin Skrtel.

But late strikes from Raheem Sterling and Philippe Coutinho mean the Reds scrape through to a fifth-round tie at Crystal Palace.