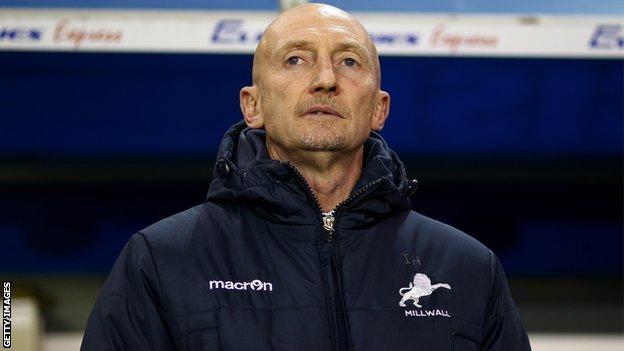 Millwall boss Ian Holloway says remodelling his squad in the transfer window was necessary to boost their hopes of avoiding relegation.

The Lions brought in eight players, a total equalled only by Crystal Palace and Crawley in the top four divisions.

"Did I really want to do that? No, but the way things were I didn't think we were earning the right to win a match."

Millwall ended 2014 in the Championship relegation zone, having won just one of their 10 league games leading up to the opening of the January window.

And Holloway said the "final straw" was their 4-0 defeat to League One Bradford City in an FA Cup third-round replay.

"No team of mine has ever capitulated as badly as that," the former QPR, Blackpool and Palace boss said.

"Luckily the chairman supported me in those decisions. He decided it wasn't my fault or my ability to manage a group. The group must not have been listening."

As well as eight new arrivals at The Den, left-back Scott Malone joined Cardiff, Holloway released five players from their contracts and three others left south London on loan.

"We ended up with too many people who had been here too long. I think that can then get a little bit stale.

"Sometimes you need to put the motorboat into the water and stir up a bit of a stagnant pool," said Holloway.

Millwall have taken four points from their last two games and could move out of the bottom three if they beat Huddersfield on Saturday and Brighton lose to Nottingham Forest.

However, Holloway has hinted he could do further business when the loan window re-opens next week.

"I'm delighted with the freshness the new people have brought and the way the fans have responded to them," he added.

"The more we get the knowledge into them and the more we work them, the more they will learn about each other and the better we are going to be.

"If, when the other window opens, I need to add one or two more things, the chairman can't wait to do it."