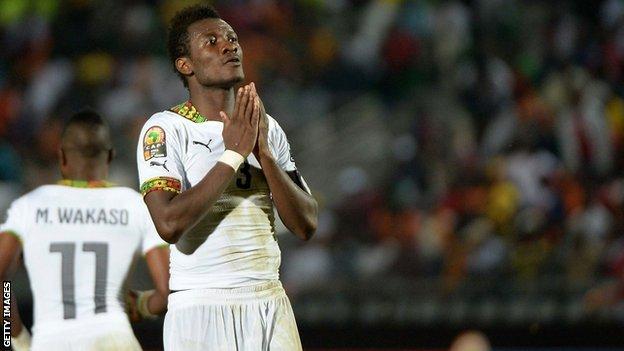 Ghana captain Asamoah Gyan could be fit to play in Sunday's Africa Cup of Nations final against Ivory Coast.

The 29-year-old missed Thursday's semi-final with a hip injury suffered when he was clattered by Guinea goalkeeper Naby Yattara in the quarter-final.

Gyan received intensive treatment and was sprinting in training on Wednesday.

"The advice to the coach was to rest him for the semi-final, to give him the best chance to play in the decider," said the Ghana Football Association.

BBC Sport's Matthew Kenyon said he saw Gyan looking fresh and walking freely at the airport in Bata on Friday, the player having arrived with his team for Sunday's final.

"Gyan looked spritely and cheerful and was happy to stop to pose for photos with fans," said Kenyon.

Gyan could have been used as a substitute in the semi-final against Equatorial Guinea but Ghana were 2-0 up at half-time and went on to win 3-0 in a match overshadowed by crowd violence.

The Black Stars skipper, who is competing at his sixth Nations Cup tournament, missed the opening game because of malaria but climbed out of his sick bed to score a last-gasp winner in the second match against Algeria to turn around Ghana's fortunes.