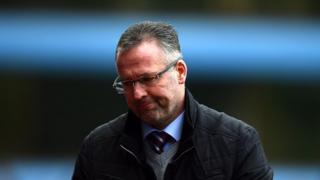 Lambert 'could not ask for any more'

Aston Villa manager Paul Lambert heaped praise on his side despite losing 2-1 at home to Chelsea, saying his players are "more than capable of winning" games.

Goals from Eden Hazard and Branislav Ivanovic, either side of a Jores Okore equaliser, gave Chelsea the three points, but Lambert felt his side were "really unfortunate" not to earn at least a draw.

Defender Okore's goal ended Villa's run of 659 minutes without a Premier League goal, but Jose Mourinho's first-ever win at Villa Park left Lambert's side without a win in nine Premier League games, in the Scot's 100th league match in charge of the Villans.