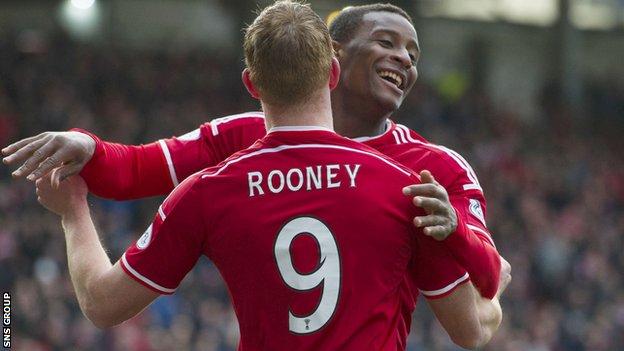 Manager Derek McInnes is urging his Aberdeen players to maintain their excellent form and push Celtic all the way in the Premiership title race.

A 4-0 success over Ross County was the Dons's ninth win in an 11-game unbeaten league run and takes them level on points with leaders Celtic, who have played two games less.

"The aim is to finish the campaign as strong as we possibly can," McInnes told BBC Scotland.

"We fell we still have a lot to play for and we want the season to go all the way to the line.

"We feel we have a squad that is capable of winning most games and if we keep doing that then we have a good chance on improving on where we were last season."

Aberdeen, who finished third last term, 31 points behind champions Celtic, lost their grip on the League Cup last weekend, losing to Dundee United in their semi-final.

"It was a great response from the players," McInnes said of his side's biggest league victory of the season.

"We were all disappointed after last week and I asked them to re-focus all of their efforts on the league campaign."

Adam Rooney opened the scoring, capitalising on a dreadful error from Staggies keeper Antonio Reguero, with Peter Pawlett, Shay Logan and David Goodwillie adding goals in the second half.

"I thought we started really well, we had good composure but the first half was a bit scrappier than I'd hoped after we got the first goal," added McInnes.

"The second goal was excellent, the build-up, the movement, the timing of the run and calmness of the finish.

"And from there on in we were very strong and got a couple more really good goals."

Pawlett and Goodwillie both started among the substitutes, along with experienced duo Willo Flood and Barry Robson.

"It's been difficult to make too many changes when the team has been doing so well," said McInnes, who enjoyed Kenny McLean's "elegant" debut.

"But I'm conscious that we need to give it a little jag here and there and utilise the squad a wee bit more.

"Peter and David both came off the bench to score, so that's a great response and it shows the strength we have."

Ross County manager Jim McIntyre was disappointed to see Reguero fumble a weak effort from Jonny Hayes for the opening goal and the keeper ought to have stopped Logan's strike for the third goal.

"Giving them a present after 10 minutes is not the way you want to start," he lamented. "Tony has done well for us in recent times but today wasn't his day.

"We need to lick our wounds and go again. We're coming to a crucial period of games and we are confident we have a group of players that can turn it round."