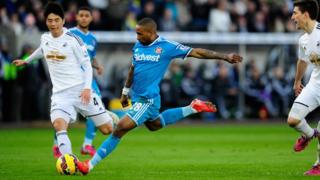 I missed the Premier League - Defoe

Jermain Defoe is "delighted" with his goal and says he has "missed the Premier League" after Sunderland's 1-1 draw at Swansea.

Defoe's first-half strike gave Sunderland the lead at the Liberty Stadium, but his effort was cancelled out by former Black Cat Ki Sung-Yueng.

The goal on Saturday was Defoe's second since signing for Sunderland in January, and his first in the Premier League.

Champions League reaction & return of fans survey - are you going to a game?

'One of biggest Champions League nights'