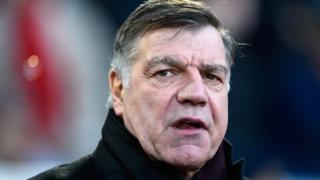 Manager Sam Allardyce described West Ham as "fantastic" in their 1-1 home draw against Manchester United, but admits "disappointment" at conceding a late equaliser.

A point was "nothing more than we deserved" after Cheikhou Kouyate's sublime volley put the hosts ahead.

The Hammers "couldn't cope with the long balls" that Manchester United played, with Daley Blind scoring late - not before Luke Shaw saw red for a second bookable offence.