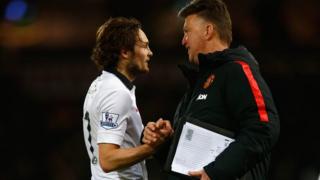 Manchester United boss Louis van Gaal praised his side's "fantastic spirit" after drawing 1-1 at West Ham following a first half that "was not good enough".

It took a 93rd-minute Daley Blind equaliser to salvage a point for United after Cheikhou Kouyate's classy finish had given West Ham the lead.

The Red Devils have failed to win a game after going behind since last seasons' 4-1 victory over Aston Villa at Old Trafford.