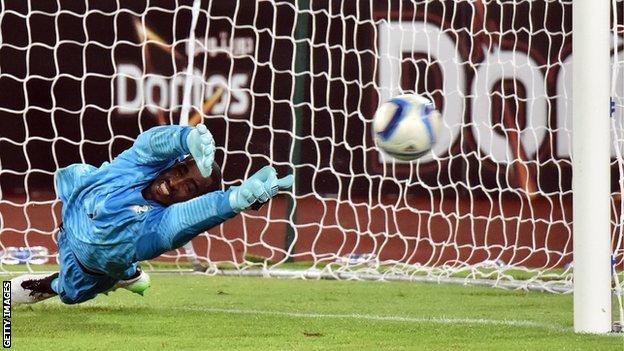 Ivory Coast goalkeeper Boubacar Barry says their Africa Cup of Nations title has been 15 years in the making.

Barry was the hero on Sunday when he saved and scored a penalty to give his side a 9-8 shootout win over Ghana.

But he said: "I thank everyone who's contributed to the national side since 2000, they made it possible and we've finally received our reward.

"We need to remember everyone who's gone before, they have worked hard. If we're here it's because of them."

The 35-year-old was only playing in the final because of an injury to first-choice Sylvain Gbohouo but stepped up to keep a clean sheet in the match, which ended 0-0 after extra time, and make the decisive contributions in the shootout.

Victory ended Ivory Coast's 23-year wait for a second title - their first came at the expense of Ghana in the same manner in 1992 - and help eased the pain of losing on penalties in the 2006 and 2012 finals.

And it finally buried the chokers tag that has accompanied the so-called golden generation of Ivorians, who had failed to live up to being favourites at recent tournaments.

"This is the compensation for everything we've done since 2000, it's for the good of Ivory Coast," Barry said.

Barry had been a key member of the team for much of the last decade but was dropped by coach Herve Renard after a 4-3 home defeat by Democratic Republic of Congo during qualification.

And when he was needed against Ghana, the Lokeren stopper was ready for his first international start since October.

"If you're called to represent the nation you need to come without hesitation," Barry said, "even to sit on the bench.

"It's not been easy but I've worked hard and reaped the rewards."

Barry, who had been suffering from cramp, revealed the source of inspiration that helped him through the nerve-wracking final kicks in the shootout - when he saved from his opposite number Razak Braimah before converting himself.

"At that moment I thought of God and I thought of my mother," he said. "It's been hard for her as I haven't been playing.

"The most important thing is the country. Thing aren't always easy, but that's life."