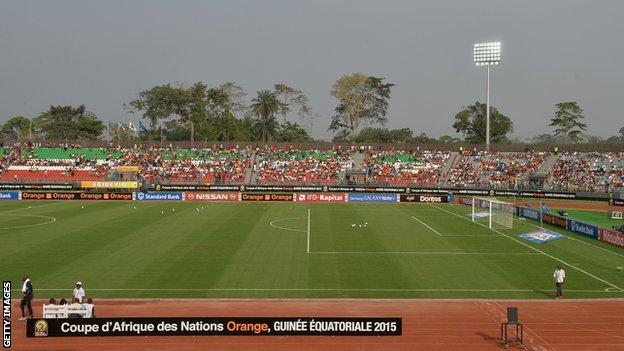 The Confederation of African Football may reduce the minimum capacity of 20,000 required for a stadium to host the Africa Cup of Nations.

It follows the use of smaller venues in the rearranged finals in Equatorial Guinea, which saw fewer empty seats.

"It gives us a sign that building huge venues in all areas is not necessarily the best thing," General Secretary Hicham El Amrani told BBC Sport.

Sparsely-filled stadiums have often been a feature of the tournament.

In previous editions of the event, matches not involving the host nation have been seldom packed out - a combination of ticket prices, working hours, apathy and the challenges facing overseas fans to blame.

However, crowds flocked to watch matches at the hastily-arranged finals in Equatorial Guinea, which used four venues.

We need to improve facilities and the way we build them

The major arenas were in the capital Malabo, with a capacity of 16,000, and Bata on the African mainland, whose 35,000-seater stadium hosted Sunday's final - as Ivory Coast beat Ghana.

"These stadiums were just the right size, considering the populations around," said El Amrani.

"In terms of proportionality, the number of spectators compared to the capacity of the venues, I think this [tournament] was the most popular one.

"The main issue that sometimes make Nations Cup matches hard to fill is the capacity of away fans to travel - whether for financial and logistical reasons, visa issues and hotel availability.

"These are factors we are working on."

The possible reduction in the required limit for stadiums would only apply to the smaller of the four venues, with the opening game and final still anticipated to be in sizeable arenas.

"The capital has to have a large venue because of the number of events it is expected to host, whether for football or any other sport, and also in terms of population," said the Moroccan.

African football's ruling body had hoped to introduce fan parks for the 2015 finals.

But Caf scrapped the plans after it rejected original hosts Morocco's request for the tournament to be postponed because of Ebola fears and Equatorial Guinea stepped in as hosts - only 64 days before the start of the finals.

"We have an obligation to make the game an entertainment, rather than just someone coming to watch Team A play Team B," explained El Amrani.

"We need to improve facilities and the way we build them, not just in terms of a stadium's capacity but also what it can offer in terms of hospitality, half-time entertainment and games for the youth."

"It's a move towards a mindset that it's not only about the football - but what's also around it."

The surrounding areas of most Nations Cup stadiums are a distant cry from those found at World Cups or European Championships, where a host of shops and sponsor-driven entertainment stands are often found.

Fan zones, which were introduced by football's governing body Fifa for the 2006 World Cup in several cities in host nation Germany, should also be in place.

"We were supposed to start the fan zones for this year's finals but it became impossible with the switch," El Amrani said.

"But we still have that plan for the next edition - with fan zones within city centres, with big screens and commercial partners' displays and with games offered for the youth.

"Then in the controlled area within the stadium, we plan to have more stands and the ability to sell more food and goodies (sic) - but also be able to entertain the fans."

After the 2017 Nations Cup was withdrawn from Libya because of security concerns last year, the next host country will be determined on 8 April.

Four countries are in contention - Algeria, Egypt, Gabon and Ghana.