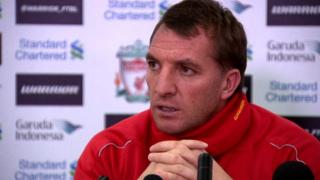 Liverpool manager Brendan Rodgers hopes Raheem Sterling signs a new contract at Anfield, saying the forward has been "offered a wonderful deal for a young player".

England international Sterling has been linked with Real Madrid and Chelsea but Rodgers said Liverpool would not pay over the odds to secure his future at Anfield.

The 20-year-old's current deal runs until 2017, but a new contract has been on the table for more than a month.