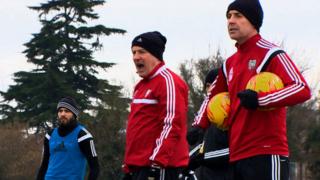 The rise of Warburton's Brentford

BBC Sport's Ben Smith reports on the success being enjoyed by Brentford under Mark Warburton, with the club riding high in their first season back at Championship level.

Former City trader Warburton oversaw the Bees' promotion from League One last season, and his side have spent much of the current campaign in the top six of the second tier.

Brentford say Warburton "will continue to lead the club", after recent speculation about his position.