Aston Villa defender Jores Okore says scoring the team's first Premier League goal for nearly 11 hours was a relief and hopes the side can now kick-on.

Okore's 48th-minute header - his first goal for the club - in their 2-1 home defeat by leaders Chelsea on Saturday was Villa's first for 659 minutes.

"It was a good moment, it's a relief for me and the team," Okore said.

"We didn't think about it being the eleventh hour. I hope it's a turning point for us to get on a good run."

Christian Benteke's goal in the 1-1 draw against Manchester United on 20 December was the last time Villa scored a league goal, but Okore says the players have tried hard not to dwell on that barren run.

"It's hard to read and hear about it but, as a footballer, you need to be professional and not focus on it," he continued to BBC WM 95.6.

"It's good to know we can go out there and score goals now." 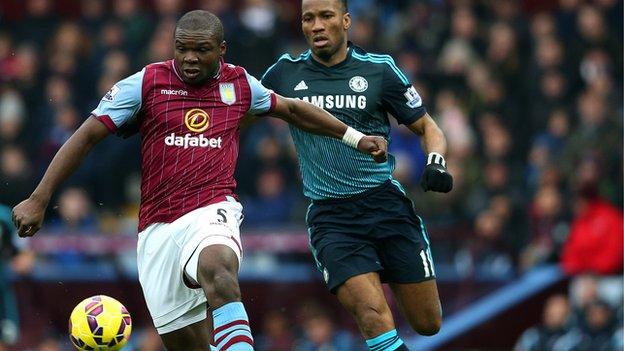 Despite slipping to within two points of the bottom three after their fourth successive Premier League defeat, Okore is sure Villa can build on the good things to come out of their display against Jose Mourinho's Blues.

"It's given us a boost but we already knew we could compete with the best in this league," he said.

"Hopefully we can get some wins and get away from the relegation zone."

The goal was 22-year-old Okore's first since his move from Danish side Nordsjaelland in July 2013 and has helped cement his place in the side following his return from a year out with a knee injury.

"I'm really happy to be playing and I just want to keep the run going," he said.

"It's my goal to stay part of the starting eleven and with Ron Vlaar coming back from injury, it really increases the competition, but I hope to keep my place."