The Premier League is "a success story" but not a charity, its chief executive Richard Scudamore has said following criticism of its £5.14bn TV deal.

Leading politicians have called for more money from the sale of domestic TV rights to be put into grassroots football and reducing ticket prices.

But Scudamore said: "We're not set up for charitable purposes. We are set up to be the best football competition."

The latest deal represents a 70% rise on the current £3bn contract.

Labour's shadow sports minister Clive Efford told BBC Radio 5 live it would be "nothing short of criminal" if the extra money from the three-season packages was not invested into grassroots.

Sports minister Helen Grant described the Premier League as "a great British success story" but said the TV deal should bring "increased benefits to clubs lower down the football pyramid".

She also called for further investment in facilities and supporters "who are the bedrock of the clubs they follow".

"It is also vital that clubs are run responsibly and sustainably," she added.

Scudamore said: "I believe the Premier League is a great UK export and it attracts a whole lot of positive feelings about the UK.

"If you go and do any international survey, things like the Premier League, the BBC, the Queen: they are things that people feel are good about the UK."

However, some fans have described the deal as "obscene", while former England internationals Gary Lineker and Jamie Carragher are among those who feel the revenue increase should result in cheaper tickets.

The BBC's Price of Football survey last year showed that the average price of cheapest tickets in England has risen at almost twice the rate of the cost of living since 2011.

Scudamore said the Premier League, which was founded in 1992, was now being broadcast in 175 countries.

"In 1986, there was no one that wanted to broadcast football," he told BBC Radio 5 live.

"There was not even a highlights programme. From the dark days of stadium disasters and other things, it's an amazing rise."

As part of the current TV contract, the Premier League says it has invested £56m in grassroots football in each of the last three seasons. It is unclear how this will be affected by the new contract.

"We've got the richest league in the world and precious little of the money is actually reaching the grassroots of the sport," he said.

"At the outset, the Premier League gave an undertaking to the government that they would put 5% of TV rights into grassroots sports. That just hasn't happened."

Andy Walker, one of the fans who part-owns FC United of Manchester, told BBC Radio 5 live: "Without ordinary supporters, there is no football.

"We've had all sorts of promises in the past from the people who run the Premier League, but, once again, ordinary supporters have been completely and utterly forgotten in all of this.

Despite price rises this season, Premier League attendances are on the increase. The average crowd last season was 36,695 and grounds this season have been 95% full.

Scudamore claimed attendances were the best since 1949-50 and defended the huge salaries that some of the game's stars earn.

"Just like in the film industry or pop industry, or any talent industry, the talent gets paid a disproportionately high amount compared to other people in the business," he said.

"It is an awful lot of money, but we have a responsibility to football as a whole and I am sure we will exercise that responsibility," he said.

"The clubs and Stoke do a lot of things in the community and if you go in the Stoke-on-Trent area, you will get the same feedback.

"It is a bit over the top to call it obscene."

Payday for the clubs

Manchester United's value on the New York Stock Exchange rose by almost 5% after the Premier League announcement on Tuesday, while shares closed at $17.03, up 77 cents.

BBC Business reporter Rebecca Marston said: "What's happened in New York is evidence clubs are expecting their payday. Investors clearly believe this is a wise investment as a direct result of this announcement." 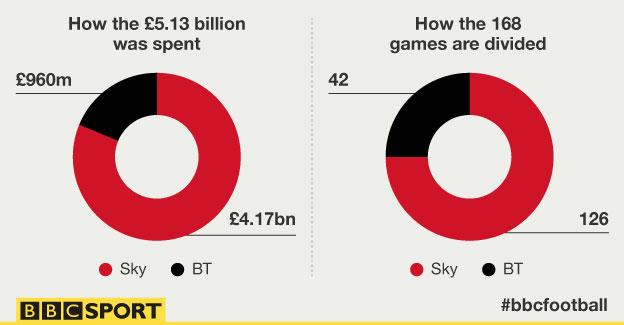