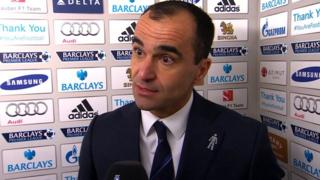 Everton boss Roberto Martinez says the Chelsea players' conduct was "a real shame" after his side lost 1-0 to a late goal.

Toffees midfielder Gareth Barry was shown a second yellow card that sparked a melee, during which Chelsea's Branislav Ivanovic pushed his head into James McCarthy's back.

Everton now have just one win in their last 11 matches.