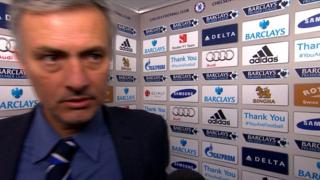 Mourinho walks out of MOTD interview

Jose Mourinho walks out on his Match of the Day interview with Jonathan Pearce after being questioned about his players' discipline.

The Chelsea manager says "sorry, see you tomorrow" and walks out of the post-match chat following his side's 1-0 win over Everton, where Toffees midfielder Gareth Barry's red card sparked a melee, during which Chelsea's Branislav Ivanovic pushed his head into James McCarthy's back.