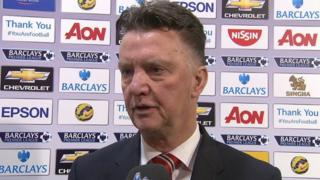 Manchester United manager Louis van Gaal says his side were "not good" and "lucky" to beat Burnley 3-1 at Old Trafford.

Substitute Chris Smalling scored twice either side of Danny Ings's equaliser as Burnley went into half-time behind despite dominating the first half, but United's Robin van Persie added a third with a late penalty to see off a spirited Clarets side.

Wayne Rooney has still not had a shot on target in the Premier League in 2015, a run totalling 540 minutes.