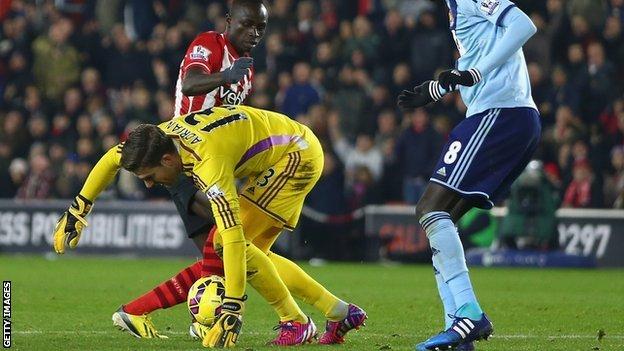 West Ham goalkeeper Adrian's red card against Southampton has been overturned by the Football Association and he can play against West Brom in the FA Cup.

However, his club has been charged with failing to control their players after the incident during their goalless draw at St Mary's Stadium on Wednesday.

Adrian, 28, was sent off after he handled the ball outside the penalty area as he challenged Sadio Mane.

But the FA have said Adrian had not denied a goalscoring opportunity.

It means the Spaniard is eligible to play in his side's FA Cup fifth-round tie at the Hawthorns on Saturday (12:45 GMT).

Referee Craig Pawson dismissed Adrian in the 61st minute of the Hammers' Premier League game at Southampton and his team-mates reacted angrily to the decision.

The FA have judged that West Ham "failed to ensure that its players conducted themselves in an orderly fashion". The club has until 18:00 GMT on 18 February to respond to the charge.