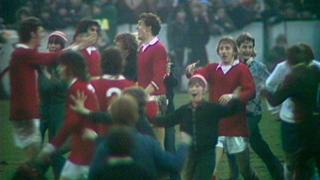 Watch footage from the fourth round of the FA Cup back in February 1972, the last time Manchester United faced Preston North End.

Time had taken its toll on the team of Denis Law, George Best and Bobby Charlton, though the three played that day as Frank O'Farrell's side toiled to a 2-0 victory.

The two sides meet again at Deepdale in the fifth round of this year's competition, which you can see live on BBC One and the BBC Sport website from 19:30 GMT on Monday 16 February.