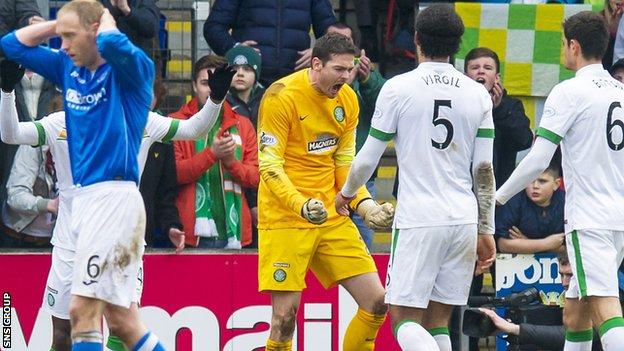 Manager Ronny Deila hailed an "unbelievable" late save from goalkeeper Craig Gordon as Celtic held on to beat St Johnstone 2-1 in Perth.

The Scotland international kept out a close-range header from Brian Graham and then tipped over Dave Mackay's ferocious follow-up shot.

"It just shows his class to do something like that when you almost haven't had a save before," Deila told BBC Scotland.

"It was an unbelievable save."

Leigh Griffiths fired Celtic in front after just 35 seconds and Stefan Johansen doubled the visitors' lead early in the second half.

However, Saints replied through Michael O'Halloran and only the athleticism of Gordon denied them a share of the spoils.

"We created a lot of chances and at 2-0 it seems quite comfortable but we concede a goal and everything turns around," added Deila, whose team are now six points clear of Aberdeen at the top of the Premiership.

"They are very aggressive and direct and good from set-plays, so we needed to defend well in the end."

"It will be a totally different game," said the Norwegian. "We will be at home with 60,000 behind us.

"It's a big test for us - and I really believe we can do it. So far it's maybe the best team we have met."

St Johnstone manager Tommy Wright was left to regret a sluggish start but was proud of the effort his team put in.

"We weathered the storm after losing a disappointing early goal and created a few opportunities as we got more into the game.

"After getting it back to 2-1, we thought we had a great chance of snatching a draw.

"And we probably would have done it but for a tremendous double save from Craig Gordon.

"I've always got belief in these players. We were 3-1 down to Celtic last year and got it back to 3-3.

"Celtic had more chances overall and deserved to win but we asked a few questions of them late on and on another day we could have got a point."

Saints have only won one of their eight matches since the turn of the year but Wright has not been too disheartened.

"If you look at that performance - particularly the second half, the Aberdeen and Motherwell games, it's been good," he added.

"If we take that into the next eight games, I think we'll get enough points to finish top six."