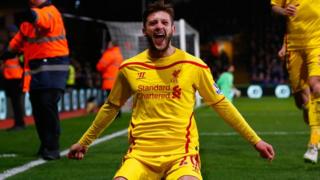 Liverpool come from behind at Selhurst Park to beat Crystal Palace 2-1 and secure a safe passage through to the sixth round of the FA Cup.

Fraizer Campbell put the home side ahead, but second-half goals from Daniel Sturridge and Adam Lallana won the game for the seven-times cup winners.

It was Liverpool's first win at Selhurst Park in 18 years.