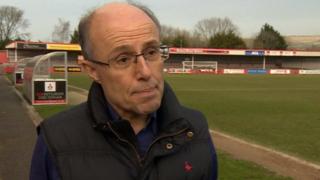 Cheltenham Town chairman Paul Baker says the reaction of fans to caretaker manager Russell Milton and assistant Steve Elliott influenced his decision to keep them on.

The duo took charge of Saturday's 2-1 defeat by Bury and will lead the League Two strugglers until the end of the season, with an "experienced" third person to be added to the backroom staff next week.

Former Robins boss John Ward has been linked with the new role and Baker says while he would be a good fit, they have five or six candidates to consider.