Toral, on loan from Arsenal, had put the Bees 2-0 up before Charles Dunne was sent off for Lee Clark's struggling Blackpool side.

Andre Gray made it 3-0 then Toral completed his hat-trick to keep Brentford just a point off the top six.

The home team registered 42 shots - 14 on target - while Blackpool had two shots, with one on target.

Former Barcelona trainee Toral, who joined Brentford on loan at the start of the season, scored his first goal since November when he swapped passes with Jonathan Douglas before poking the ball beyond Blackpool keeper Joe Lewis. 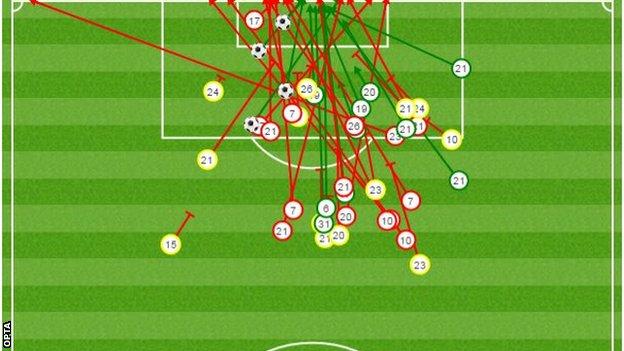 Toral, 20, made it 2-0 by powering home a far-post header from Gray's cross before Dunne was dismissed for felling Spanish winger Jota just before half-time.

Gray added Brentford's third when his low deflected drive bounced in off the post after Lewis had saved his first volleyed effort.

Bees centre-back Harlee Dean went close with a curling effort and Brentford made it four as Toral completed his hat-trick from the resulting corner. Sam Saunders's floated set-piece found Toral, who finished at the far post to increase the misery for Blackpool, who are bottom of the Championship.

Brentford manager Mark Warburton: "We were very professional and moved the ball well, kept our focus and kept the pressure on a side that are scrapping for their lives.

"I don't want to be disrespectful to Blackpool because we got an early goal and they lost a player, which made it very difficult for them, but in that kind of form we are a match for any side in this division."

Blackpool manager Lee Clark: "When you go two down and then lose a man against a side like Brentford, it's always going to be a battle. It's a tough place to come even when it's 11 against 11.

"Perhaps I would like to have seen a little more grit after the first goal went in, but we keep making life difficult for ourselves.

"We have plenty of games left and Wigan on Saturday. If we win that then we are right back in the race."