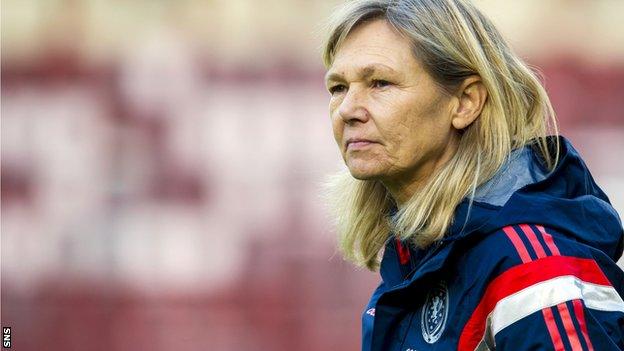 The Swede replaced Dutchwoman Vera Pauw at the Scottish Football Association in March 2005 and her new deal runs to the end of the Euro 2017 qualifiers.

"The last 10 years have been fantastic, and I am so proud of what we have achieved together," said Signeul.

"Reaching the Euro and World Cup play-offs have been highlights, tinged with the pain of missing qualification."

Signeul was shortlisted for the Fifa World Coach of the Year for Women's Football in 2013.

In her time in the post she has led the squad to their highest-ever world rankings (11th in Europe and 19th in the world in March 2014), reached the play-offs for the 2009 and 2013 Euro championships and last year led Scotland into their first Women's World Cup play-off.

In a statement, she continued: "I am delighted to pledge my future to Scotland for another two years and continue this journey with a fantastic group of players and staff.

"The determination to go one step further and make it to the finals of a major tournament is what drives us all."

The SFA's chief executive Stewart Regan said: "The growth of women's football has been one of the real highlights of the Scottish FA's strategy, Scotland United: A 2020 Vision, and we are convinced that Anna will continue to push the boundaries of success for the national team, with the ultimate aim of qualifying for a major championship finals for the first time."

Meanwhile, Signeul has chosen her squad to play in the 12-team Cyprus Women's Cup next month.

The group comprises hugely experienced players and those just starting out on their international careers.

Scotland play Canada in Nicosia on Wednesday 4 March followed two days later by a game against Italy in Larnaca. They have a free weekend before completing their Group A ties against Korea Republic on the Monday, again in Larnaca.