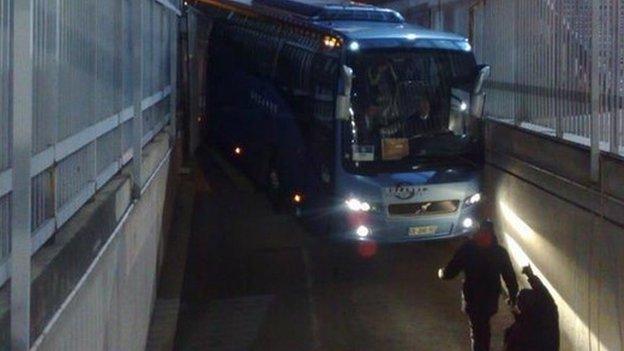 Ahead of the Blues' 1-1 Champions League draw with Paris St-Germain at Parc des Princes on Tuesday night, images emerged of their team coach lodged in a stadium gangway.

Blues manager Mourinho has been accused of "parking the bus" in matches - but usually on the pitch, not off it.

The term has become a common criticism aimed at Mourinho's occasionally overly-cautious tactics.

Chelsea were almost as resolute as the bus in the match, with Branislav Ivanovic scoring from their only shot on target. Edinson Cavani equalised for PSG.

PSG had already tweeted a tongue-in-cheek swipe at Mourinho. Leading 2-0 against Caen on Saturday, the French champions tweeted:

But the joke backfired when Laurent Blanc's side conceded two late goals and ended up drawing 2-2.