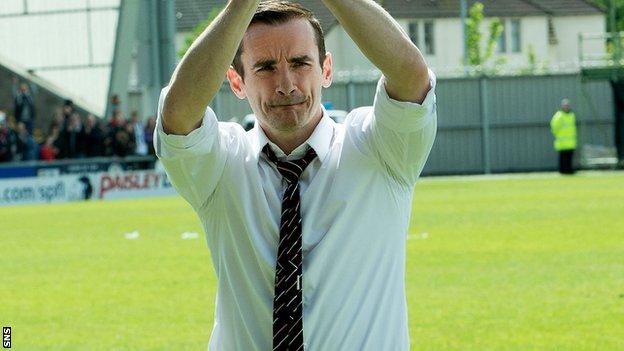 Former St Mirren manager Danny Lennon will take charge of Scotland under-21s for their friendly in Hungary in March.

The under-21s have been without a manager since the departure of Billy Stark in November.

Lennon has agreed to oversee the side pending the appointment of a new Scottish FA performance director.

"I am proud to have been given this opportunity," Lennon said, adding that he is excited about working with the "brightest young" Scottish players.

They hope to conclude the process by the end of February.

"I am pleased Danny has agreed to take charge of the team for the upcoming under-21 match before a longer-term appointment can be made," said SFA chief executive Stewart Regan.

"Danny is a highly regarded coach and has worked at a very good level. I am confident he will look after the squad as they continue their preparations for the European qualifying matches which begin later this year."

Lennon started his managerial career at Cowdenbeath and led them to successive promotions in 2009 and 2010.

He was appointed St Mirren manager in June 2010 and led them to their first-ever Scottish League Cup win in 2013.

The Buddies decided not to offer Lennon a contract extension in the summer.