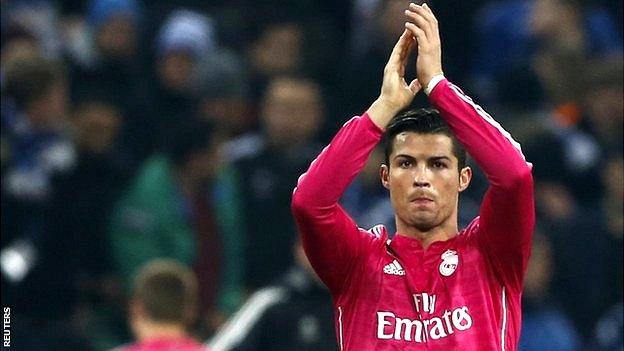 Ronaldo began Wednesday's Champions League last-16 tie in Schalke without a goal in three games but scored the opener in a 2-0 first-leg win.

"Cristiano is back," said Ancelotti of the forward who now has 58 goals in 58 Champions League games.

"Today we needed a game like that, with this attitude. Everything went well."

Ancelotti, who guided Real to a 10th European Cup last season, spoke of his confidence in Ronaldo in the build-up to the match when questioned about the World Footballer of the Year's goal drought.

A fourth game without finding the net would have been Ronaldo's worst run in front of goal since 2011, but he headed in after 26 minutes and later passed to Marcelo, who finished sublimely in the second period.

"He scored, he played well and gave an assist," added Ancelotti. "It's not a problem for us if he doesn't score for a game or two but it's obvious that the goal did him good.

"It wasn't only a goal for the statistics. It was an important goal - the lead goal."

They remain the only side with a 100% record in this year's tournament and Ronaldo - on six - is now just three goals behind the competition's leading scorer - Luiz Adriano of Shakhtar Donetsk.

But Real nearly left Germany without a win as Schalke struck the woodwork moments before the lead was doubled and the home side ended the night with eight shots on goal, only three fewer than the holders.

"Look at his quality," Schalke 04 coach Roberto Di Matteo said of Ronaldo. "He goes into the box once and scores a goal. Then he sets up the second. The quality made the difference tonight."