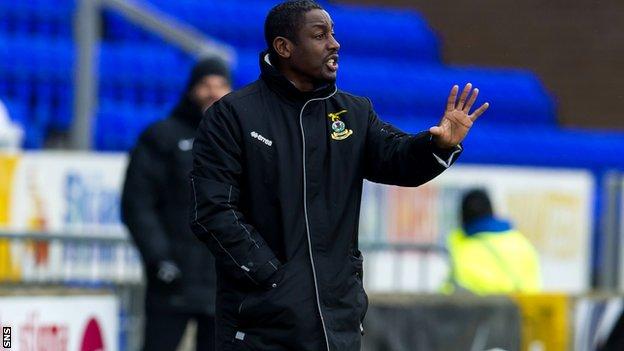 Inverness assistant manager Russell Latapy believes now is not the time to be thinking about securing a European place for next season.

Caley Thistle are unbeaten in 2015 and currently sit third in the Premiership.

They also have a six-point cushion over Dundee United for the last automatic league European qualification spot.

But Latapy told BBC Scotland: "There will be a time for thinking about European football and that sort of stuff. That is not the time now."

And he added: "Because the club has never played in European competition it would be nice and would be a margin of taking the club forward. But we don't want to get ahead of ourselves.

On Saturday, Inverness Caley Thistle host a Kilmarnock side that are unbeaten under interim manager Gary Locke.

"Gary has always been a very competitive person and player," said Latapy. "We expect his teams are going to be competitive. We've had some really tight games against Killie this season.

"We're confident if we play the way we want to play, which is getting the ball down and passing it, then we have a good opportunity to win football games and pick up points."

Inverness face what could prove to be three pivotal games in the space of a week, with the re-arranged match away to Dundee United on Tuesday particularly vital in the race for Europe.

"We cannot start thinking about Dundee United without having the Kilmarnock game out of the way," added Latapy.

"I agree that it's an important week. United sit in fourth, we sit in third, so if we can get a victory in that game it will put some space between us which is always good in this league.

John Hughes's Inverness side are just six points behind leaders Celtic and are virtually certain of a top six finish. They also have a Scottish Cup quarter-final tie against Raith Rovers to follow in March.

Latapy maintains they judge their improvement on performances, balanced by the necessity to achieve results.

"Success is two-fold," he said. "From the time the manager came in he implemented a certain style of football that he wants to play. As close as we can get to that type of football is success.

"But the reality of management is that you need points as well. We believe that if we play the type of football we want then we can pick points up along the way.

"We think that it gives us a better opportunity to get points on the board if we can maintain possession of the ball, pass it around; create goal-scoring opportunities."